Simply open the app and it’ll impart the genius of one of the Rules of Acquisition.

The watchOS rendition appears as below: 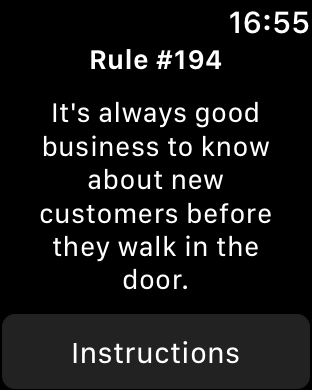 The Watch edition of the app includes gesture-based navigation, as explained in the bundled instructions: 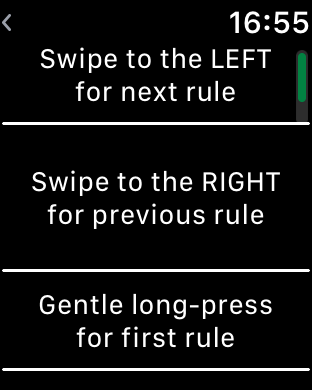 Any Apple Watch app must be delivered via an iOS app, so there’s an iOS version of it too:

The Rules of Acquisition is on the iOS App Store, here.

If you require assistance with the Rules of Acquisition app, you may contact:
[roa] @ [protomatter] . [ca]

The list of rules were adapted from those collected by Stephen Jacob and have long since been publicly available here. He graciously agreed to their use for this app. A few were trimmed-out as they weren’t as much funny as simply offensive. So this isn’t the comprehensive nor an official collection of the rules. I’m sure the Grand Neghus would disapprove, but you can still enjoy them!

The artwork was created by Luke Denby, here. He too kindly allowed it to be used for this app.